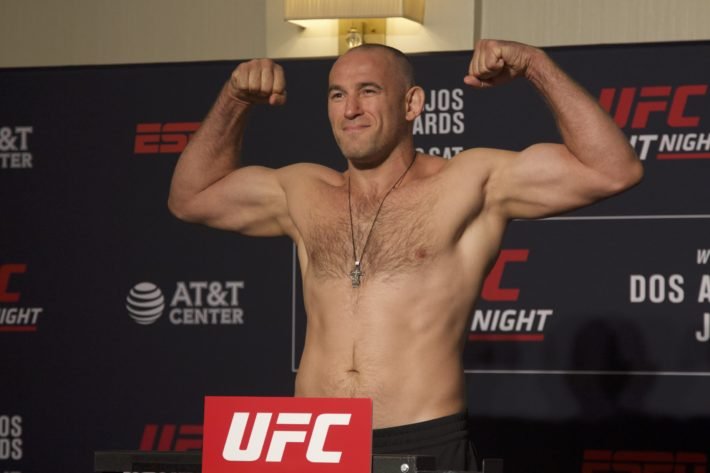 UFC Vegas 19 has an intriguing heavyweight match-up as its main event, with Derrick Lewis and Curtis Blaydes locking horns. But, that’s not the only clash in the heavyweight division on the card. Aleksei Oleinik will fight Chris Daukaus in the main card too. The 43-year-old, Oleinik, will enter the Octagon for the 13th time as he takes on his 31-year-old counterpart.

‘The Boa Constrictor’ will make a massive 75th appearance as a professional against Daukaus. He has won only 2 out of his last 5, with his last win coming over former UFC heavyweight champion, Fabricio Werdum, at UFC 249.

Daukaus will look to win his third UFC fight in as many appearances inside the octagon.

Oleinik, who has a massive 46 submission wins under his belt, is one of the best submission artists to ever grace the sport. On the flipside, Daukaus is primarily a striker, as he has secured 9/10 wins via T/KO. In the UFC, he has secured a 62% striking accuracy.

As for Oleinik, his UFC takedown accuracy stands at 48%. He is lethal on the ground and can submit his opponents from any position. His stand-up game can be deemed underrated, as he has 50% UFC striking accuracy with 3.52 strikes attempted per minute.

Daukaus has yet to face a takedown in the UFC, and his takedown defense ability will be put to the test this Saturday.

Oleinik certainly has a huge experience advantage over his opponent. But, Daukas will be looking to use the exuberance of youth to his advantage. ‘The Boa Constrictor’, who lost to Derrick Lewis in his last outing, will not want to suffer a second consecutive defeat.

But, Daukaus is no pushover and knows a win over ‘The Boa Constrictor’ could fast track him to the rankings and fights against similar top-quality opposition. His last outing against Rodrigo Nascimento was a measure of his potential, and the UFC newcomer would want to show that it was not just a one-off display.